Fingerprinting, also known as Hashing, is the process of transforming any given string of characters, such as the ones and zeros of a file, into another value. This other value is usually represented by a shorter, fixed-length sequence of characters that can look like this:

To be able to deduplicate files on shared storage, Strawberry first needs to create at least one fingerprint for each file that it manages. Fingerprinting is not limited to media files but includes all file formats within the Strawberry-managed structure on the shared storage.

In addition to the “Essence Fingerprint”, Strawberry generates a “Metadata Fingerprint”. Together, these two fingerprints serve as unique identifiers for a file.

The essence fingerprint is generated based on the physical bits of a file. As every file on a computer is, ultimately, just data that can be represented in binary form, SHA-512 can take that data and run a complex calculation on it and output a fixed-length string as the result of the calculation. The result is the file’s fingerprint.

In order to add an additional level of file uniqueness, Strawberry can also generate “Metadata Fingerprints”. For video files, the metadata fingerprint is generated using the format, codec, aspect ratio, width, height, duration, colorspace, and more for the input video. For audio, it includes the audio codec, sample rate, number of audio tracks & channels, and if available any ID3 tags such as the title, album, artist, genre.

If two files have the same metadata & essence fingerprints, then this means that they are identical, or in other words… one of the files is an exact copy of the other one. 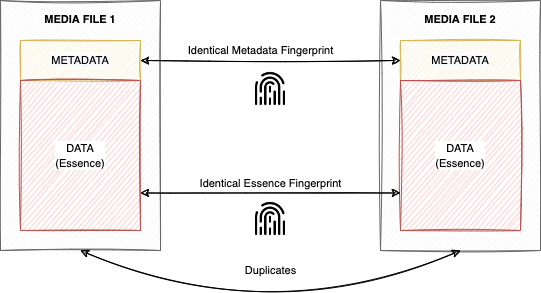 If you would like to learn more about SHA-512 and hashing in general, we recommend having a look at this article: https://medium.com/@zaid960928/cryptography-explaining-sha-512-ad896365a0c1

Need more help with this?
Visit the Projective Support Websites

Thanks for your feedback.